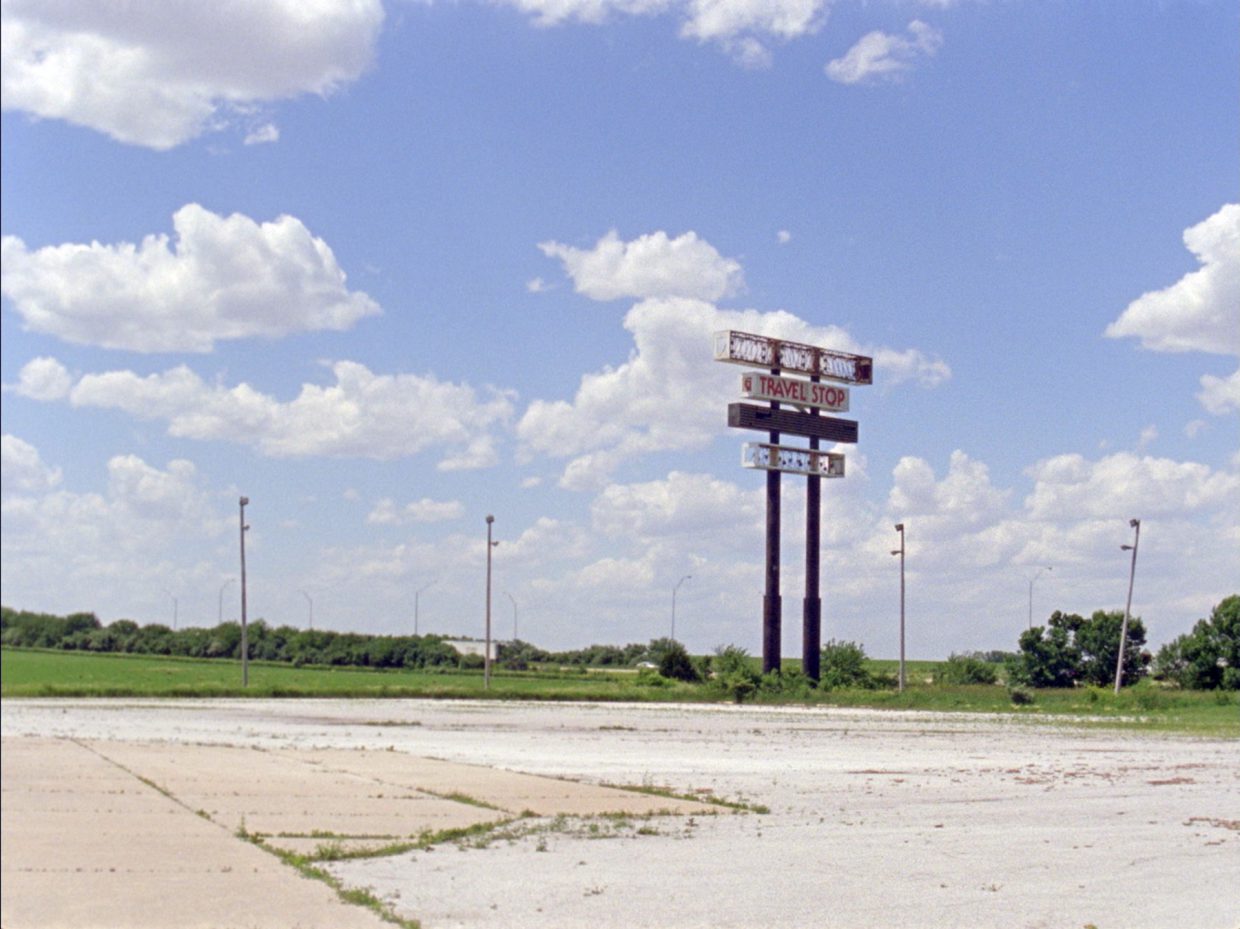 This suite of films works within the physical boundaries of particular destinations—domestic or public—to explore the complexities implicit in even the most mundane of spaces. Blue Loop, Julydocuments an amateur July 4th celebration in one of Chicago’s lower west side neighborhoods. The law films—collectively titled the Motive Power series—use excerpts from Richard Feynman’s Messenger lectures at Cornell University combined with footage from domestic interiors (belonging to Gibisser’s grandparents) to create a meditation on the process of aging, as well as the metaphors and beliefs embedded in scientific axioms themselves. In Travel Stop, this same attention is turned toward the interior of a Midwestern highway rest stop, investigating the architecture and the objects for their ideological underpinnings.

Chicago’s summertime blazes, unanchored. Skywriting out of time. Blue Loop, July creates an odd document of a long-standing celebratory tradition in one of Chicago’s lower west side neighborhoods. By leaving the camera’s shutter open for seconds at a time, the film transforms a summertime spectacle into a light-trace animation that unseats reliability of spatial and temporal direction.

The second law of thermodynamics, the law of entropy, states order tends toward disorder. An old woman passes time in her home. The dust in the air sometimes floats skyward. -MG

The third law of thermodynamics describes the parallel decline of temperature and entropy within a closed system—both continuous processes approaching an impossible limit. With open windows, seasons change in a home as memory persists. Death is a snowstorm in summer. –MG

First Law: Quail Ct. is one of four films that make up Mike Gibisser’s Motive Power Series. Each part of the series is shot at the titular street address and is a meditation on the thermodynamic laws, in this case, the notion that energy can neither be created nor destroyed. Gibisser examines the metaphors encased within these scientific truths to explore the boundaries between physics and metaphysics. Gibisser’s film is at once a tender and loving personal documentary and astute visual essay, where footage of space exploration and moon landings is juxtaposed with the day-to-day exercises of an old man alone in his apartment. -Images Festival

Shot at the World’s Largest Truckstop in Walcott, Iowa, the film contemplates the interiors of a Midwestern highway rest stop, creating an essayistic portrait of a familiar site of travel and transience. Lead by texts concerned with the incongruities of supermodernity and nostalgia, Travel Stop examines how individual identity is called upon, regressed, emptied, overburdened, or parceled when traversing the US interstate.

Mike Gibisser is a filmmaker and artist interested in navigating the indefinite lines between essay, narrative, experimental, and documentary work, often drawing together disparate subjects or time periods. He has presented work at numerous galleries and festivals around the world, including the International Oberhausen Film Festival, Ann Arbor Film Festival, the Harvard Film Archive, Tony Wight Gallery, Block Cinema, the AFI Film Festival, the Images Film Festival, the European Media Arts Festival, threewalls gallery, and Projections/Views from the Avant Garde in the New York Film Festival. His work has been featured in Artforum, Variety, and Cinemascope, amongst other publications. He is currently an Assistant Professor in the Department of Cinematic Arts at the University of Iowa.