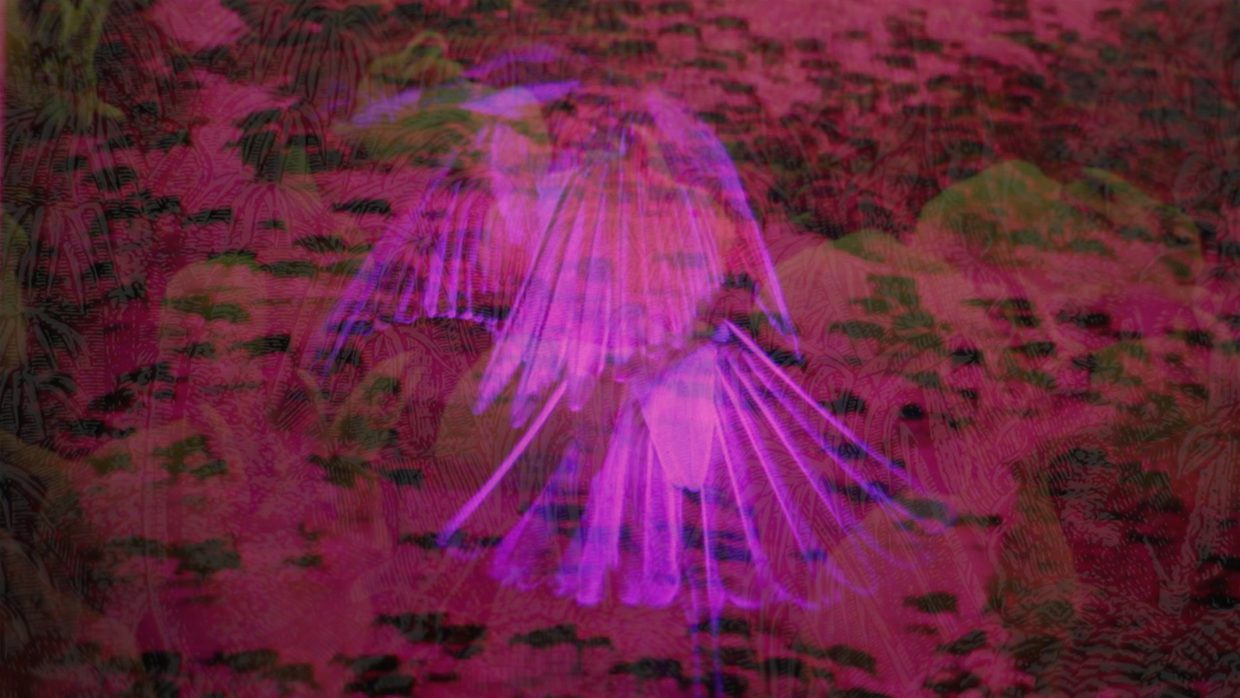 Victoria
Duration: 9:53
Year: 2012
Filmed at confrontation sites around the eastern seaboard of the US and the old growth wilderness of North America, Victoria draws on the cyclical aspects of fear, and nature. The people, landscapes and animals shift around in time and change characteristics through a collage of different environments.

Title: In Reps of Long-Play
Duration: 6:56
Year: 2013
The curtain opens, and Greek pillars mark an entry point to the stage. Exploring aspects of mediation, the actors command a state of documentation while the director’s hand controls motion.

On The Evening
Duration: 6:50
Year: 2014
On The Evening portrays boundaries between the visible and invisible. Sounds and images describe an anxious landscape of historical borders. The sky and sea are riddled with clues, and a text conversation reveals a foggy future through an altered state of consciousness.

Over Fractured Water
Duration: 4:59
Year: 2014
Over Fractured Water is a retelling of an industrial narrative through textures, movements and sounds. Legend swells in a hard to identify location. The materials and words mix up the narrative of land extraction, leaving a workforce numb and petrified.

Missing In-Between the Physical Proper
Duration: 6:00
Year: 2016
A collage of sound and video that speaks to relations between the planet, death, and transformation. Re-photographed landscapes and text suggest ideas of commodification. – OC
“A prismatic collection of re-photographed images––of deserts and oceans, plants and animals––are disrupted and transformed by an array of color filters, soft synth accompaniment, and familiarly boorish messages lifted from the online world.” — Chloe Lizotte, NYFF

Olivia Ciummo, is a filmmaker and artist based in Los Angeles. Over the last decade she has made more than two-dozen short films and has exhibited at museums, film festivals, galleries, universities and cultural centers, both nationally and abroad. Her work has screened at venues such as Projections at the New York Film Festival, The Museum of Modern Art – NYC, Museum of Portimão- Portugal, Media City Film Festival- Windsor, Crossroads Film Festival- San Francisco, Cairo Video Festival – Egypt, Minneapolis St. Paul International Film Festival, and The Paris Festival of Different and Experimental Cinemas. She has an MFA in Moving Image from The University of Illinois at Chicago, and she taught film, video and other media arts in higher education for quite a few years, she is taking a break from teaching to be called “mom”.